We heard about CODEPINK's plans to bring playground equipment to Gaza. Here is the donated equipment in Gaza being discovered by some children. The CODEPINK delegation also delivered a letter penned by Hamas officials to Pres. Obama in Cairo where he delivered a landmark speech to the Arab world. ..."The delegation of journalists, social workers, professors and activists carried the letter to the U.S. Embassy here along with a petition signed by more than 10,000 Americans asking Obama to go to Gaza to witness the impact of the recent Israeli invasion there and its ongoing blockade of the Gaza border".

The May delegation to Gaza is for the children of Gaza.

See this page to learn more about what they are doing. 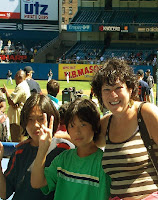 Produced by Dori Smith
TRT: 29:38 music faces to 21
Music by Fritz Heede
Download at Pacifica's Audioport or at Radio4all.net and Archive.org

Listen to this week's show!

We hear from members of another CODEPINK delegation that has been making slow progress into Gaza. Pam Rasmussen joins us from Cairo where she has been working to help all of the delegates. First, Canadian Sandra Ruch joins us from Gaza and talks about the difficulty her group had getting into Gaza with humanitarian aid. The Jabalia Refugee Camp she said her group was about to visit houses a population of 195,249 refugees according to the UN. The total number of displaced people swelled swelled tremendously all over Gaza after the January bombing.

The Canadian, US, student, and high profile delegates such as Dr. Patch Adams and Professor Norman Finkelstein, are visiting Gaza to deliver toys, school supplies and materials to build three playgrounds.

Due to the Israeli siege, items such as toys, paper and construction materials are almost non-existent in Gaza. You can follow their progress online at www.womensaynotowar.org.

And Marjorie Cohn, President of the National Lawyer's Guild, offers her reaction to President Barack Obama's appointment of US Court of Appeals Judge Sonia Sotomayor to the Supreme Court. Marjorie Cohn lectures throughout the world on international human rights and U.S. foreign policy. Her new book is Rules of Disengagement: The Politics and Honor of Military Dissent. Her 2007 book was Cowboy Republic: Six Ways the Bush Gang Has Defied the Law.

Topics include Gaza, the Sotomayor appointment, and some of the issues that the National Lawyer's Guild is considering such as the death penalty, see also Troy Davis, on death row in Georgia, the question of disbarment for the so-called 'torture' lawyers, see www.DisbarTortureLawyers.com, Gaza, Judge Goldstone, Israeli war crimes, investigation into what both sides did in Gaza, and Sotomayor's decision in favor of the civilian plaintiff in a lawsuit against a company working under federal contract, her decisions on the baseball strike and cases involving the strip searching of young women.

Photo taken in Gaza by National Lawyer's Guild delegation
See other photos of the NLG delegation to Gaza here.

Also, the National Lawyer's Guild sent a delegation to Gaza and returned with important film and a report, a report was sent to Judge Goldstone, appointed by the UN to investigate war crimes in Gaza.

We will have more on Gaza, and Palestinian rights in upcoming programs as we look at discussions between Palestinian leader Mahmoud Abbas and President Barack Obama going on this week. In the background, UN Secretary General Ban Ki Moon met with Justice Richard Goldstone, who was appointed last month by the Human Rights Council to lead an independent fact-finding mission to investigate international human rights and humanitarian law violations related to the recent conflict in Gaza.

Judge GOLDSTONE said he was "DISAPPOINTED" after finding no positive response from the Israeli Government to their mission.

Photos of Judge Sonia Sotormayor provided by the White House

Labels: Codepink in Gaza, Marjorie Cohn on Appointment of Judge Sonia Sotomayor to the US Supreme Court