Who put Troy Davis on death row in Georgia? How might their actions be keeping him there? 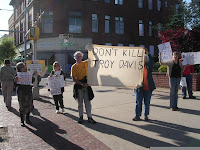 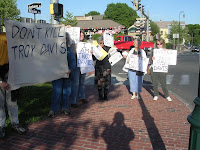 An Overview of the Troy Anthony Davis story, and how despite overwhelming evidence of unreliable evidence at his original trial, Davis remains on death row facing execution in 2009.

We are offering a new 'who's who' of the individual prosecutors and other officials who put Davis on death row, and documenting areas where their actions may have set up a process whereby a pattern of injustices is reenacted by courts over and over again.

Assuming guilt, twisting facts, and admitting bias, Georgia DA Spencer Lawton spoke at length with TNR producer Dori Smith about Troy Davis, the man he put on death row back in 1989. He revealed more than he may have realized during the interview, showing how the same old unreliable evidence provided at Troy Davis’s original trial has persisted in undermining his appeal proceedings.

The original misuse of power that led prosecutors, police officials, judges, and others, to put this man behind bars, may have set up a scenario whereby justice is being permanently denied.

Spencer Lawton was the subject of a Talk Nation Radio special, October 23, 2008 on Georgia law and the shortcomings of original legal proceedings.

In April the 11th Circuit Court in Georgia found against Davis's attorneys in their efforts to obtain a new trial. Amnesty International is holding a Global Day for Troy Davis May 19, 2009.

» Find out what Global Day activities are happening in your state
» Organize and register your own Global Day of Action for Troy Davis event
» Download and print the May 19 Atlanta rally flyer
» Don't forget: Share pictures from your Day of Action events or activities

Here is a program we produced for Pacifica shortly after news that Troy Anthony Davis would get a new hearing by the 11th Circuit Court of Appeals. He had been spared the death penalty by only two hours, but his suffering family was hopeful that they might never have to go on death watch for him again.

Troy Davis has been in prison for more than twenty years for a crime he insists he did not do. There are many thousands of people who believe him. The human rights group, Amnesty International has long been his advocate. But how did Troy Davis actually arrive on death row? We list radio specials on Troy Davis.

September of 2008, Troy Anthony Davis V the State of Georgia. Interviews include:

1.) Martina Correia, Troy Davis on her inspirational life story of advocacy for the brother she loves. She discusses the problems created for her brother when the 1996 Antiterrorism and Effective Death Penalty Act of 1996. The 11th Circuit Court in Georgia refused to hear new evidence in the case due to a procedural problem created by this Act which was retroactively applied to Troy Davis and other death row prisoners. The Act set tight limits on the number and timing of appeals.

But speaking with the man who put him there, Spencer Lawton, one gains special insights about the case.

Spencer Lawton was the controversial DA featured in the book, 'Midnight in the Garden of Good and Evil'. He is sensitive about that, but not willing to discuss the reason that this book and a film made about it are still relevant.

Back in 1989, Spencer Lawton watched the Georgia Supreme Court release James Williams, a man he had just tried for murder. That conviction was overturned due to the fact that Lawton failed to provide evidence at trial that could have been used to clear Williams.

There have been other men released from Georgia's death row after new evidence proved their innocence. Georgia has been heavily criticized by anti death penalty activists who argue that there have been 130 people released from death row in various states after law firms took it upon themselves to investigate their cases.

They argue that the state has made it impossible for death row prisoners to obtain evidence hearings and new trials due to strict laws that demand proof that original trial testimony was false.

It's an impossible standard to meet according to trial attorneys long frustrated by Georgia court proceedings.

More than 220 people have been exonerated by DNA evidence according to Ezekiel Edwards, an eyewitness expert and staff attorney at the Innocence Project based in New York. Obviously, mistakes are possible. Yet Spencer Lawton has long argued that the original Troy Davis trial was sound, and new evidence from seven witnesses who recanted their testimony, should not be believed, is suspect because it is "too coincidental".

This failure to acknowledge serious flaws in the judicial process may cost Troy Davis his life.

Perhaps the case was fresh in Lawton's mind as he prosecuted other cases like that of Troy Davis between 1989 and 1991 when Davis was convicted. We cannot know for sure, but what we can know is that during the original trial of Troy Davis, there were witnesses who were trying to recant their earlier statements to police. Those statements were part of the court record. Yet on October 21, 2008, Spencer Lawton told Talk Nation Radio listeners that the "they all denied" they had been coerced.

Here is an excerpt: —DA Spencer Lawton: “The attorneys for Mr. Davis examined them closely, did everything in their power to get these people to say that they were coerced by the police or that they really didn’t see what they thought they saw or whatever. And they all denied that.”

Dori Smith: “Lawton is incorrect about that says Attorney Deirdre O’Connor, director of the group Innocence Matters based in Georgia and California. O’Connor wrote an Amicus brief to the Georgia Supreme Court in support of an appeal to have evidence in the case officially reviewed. She says several witnesses including a 16-year-old named Darrell Collins, did tell the court the testimony had been coerced.”

Attorney Deirdre O’Connor: “When the prosecutor was trying to get him to implicate Mr. Davis Mr. Collins said listen, these things that I said to the police weren’t true. I said them because they threatened me. They told me that they would put me in jail, that I would be charged with a crime. Here are some quotes. he said, “I told the detective what he wanted to hear cuz I was scared. I didn’t want to go to jail. The police told me if I didn’t cooperate with them I’m gonna be in prison for ten to twelve years.” Right? But this was testimony provided in his presence to the jury in his case in which he was the lead attorney”.

Smith: “During an appeal hearing in 2007 the Georgia Supreme Court heard an Assistant DA named Lock admit that there were witnesses who tried to back up at trial who said they had been coerced by police into signing statements:”

Other guests on today’s show include: Attorney Deirdre O’Connor of Innocence Matters. She has been speaking with Troy Davis throughout the week and wrote an Amicus brief for the 2007 Georgia Supreme Court appeal in support of the defense. Kathleen ‘Kitty’ Behan is one of Troy Davis’s previous attorneys. Ezekiel Edwards is an eyewitness expert and staff attorney at the Innocence Project. He offered scientific analysis of the witnesses statements in the Davis trial for an upcoming Talk Nation Radio special that aired on 10/24/2008 On Talk Nation Radio broadcast station WHUS in Storrs, Connecticut.

Update: Willimantic, Connecticut May 19, 2009, at the Wrench in the Works Collective a discussion followed by a candle light vigil for Troy Davis. See: Global Day of Action for Troy Davis

Connecticut
Save Troy Davis!Changed my face book and twitter status' to "Text TROY to 90999" and put up fifty posters around my college campus.

FAITH IN ACTION FOR TROYWe've been publicizing Troy's case and praying for him during services. We have a display set up at the entrance to our synagogue with flyers and info sheets to inform people about Troy's situation and urge them to take action.
When: ongoing
City: Hamden
Location: Congregation Mishkan Israel
785 Ridge Rd.
Hamden, CT 06517
Organizers: Social Action Committee, Congregation Mishkan Israel
Contact: Rabbi Herb Brockman, 203-288-3877, cmirabbi@snet.net

Labels: 2009 another count down hopefully to justice, Troy Davis overview May 14