Francis A. Boyle on US Strategy for Color Revolution in Iran

Talk Nation Radio for June 25, 2009
Francis A. Boyle on US Strategy for Color Revolution in Iran
: A continuity of American policy under Bush and Cheney

Is the US running a covert operation in Iran designed to promote a color revolution as a way to bring about regime change? We asked international law expert Francis A. Boyle. According to Professor Boyle, the Obama administration is likely trying this policy out prior to implementing other strategies, and notes that the people working on the region now are maintaining continuity with previous administration. The U.S. may well delay diplomatic talks at least for now.

We hear about Obama's MidEast advisory team and discuss what the events in Iran mean in context with US policy.

Under former President Bush and Vice President Cheney the US was supporting opposition candidates, and in 2007 Bush authorized a covert "black" operation to destabilize the Iranian government, according to ABCNews.com. You can read a May 22, 2007 report about the operation in www.Global Research.ca.

Questions about Iran's election results persist and they are more specific now that the Guardian Council there has released more of the numbers. Professor Ali Ansari, Daniel Berman and Thomas Rintoul, have written a report for the London think tank, Chatham House questioning the result of 13 million more votes for Ahmandinejad. The report notes that two districts produced more votes than eligible voters. A joint BBC and ABC News poll taken before the election did predict an 89 percent turnout with Ahmandinejad the winner by two to one over leading contender Mir Hossein Mousavi. The poll was taken by the Center for Public Opinion of the New America Foundation.

Former State Department, NSC, and CIA official Flynt Leverett is now with the New America Foundation and he has said he finds the Ahmandinijad win credible, even if the election was imperfect.

The US press has largely covered political controversy surrounding President Barack Obama's reaction to violence against election protesters in Iran. And some of the details of the election itself have not been well analyzed. For example, opposition candidates declined a proposed ten percent recount early on. (Note, the ten percent election review standard is also used in various US states including Connecticut, which uses it for audits.)

A spokesperson for opposition candidate Mir Hossein Mousavi, told al-Jazeera only a fresh election would do. And on Tuesday June 23rd the opposition was offered a five day extension to a deadline for looking into election complaints. It is not clear if the extension was accepted, but there was something of an answer in large street protests called by two remaining opposition candidates, Mousavi and Mehdi Karroubi.

Dozens of people have been killed during street protests though reports on the numbers vary widely. [See this report in Al Jazeera, English.]

At a press conference Tuesday June 23rd President Obama responded to questions about a video depicting the death of Neda Agha Soltan. She appears to have been shot by government troops during a protest in Tehran June 20th.

BACKGROUND: By 2006, US journalists and scholars like Dahr Jamail, Seymour Hersh and Francis A. Boyle, were expressing concern that the Bush administration's policy of regime change for Iran would include a military attack, likely conducted with Israel.

The University of Southern California's Muhammad Sahimi provides a detailed overview of the political climate in Iran in 2006 in a report titled: The Neoconservatives' Strategy for Regime Change in Iran. He argues that US efforts to use the Persian Press to build up opposition candidates in Tehran would likely be seen as propaganda. But there were other operations that seemed far more ominous.

Guy Dinmore reported in the Financial Times of London that the US Marine intelligence wing had launched a probe into Iran's ethnic minorities, and were searching for any grievances against the Islamic Government that could be exploited. The Pentagon was studying whether like Iraq, Iran might be prone to violent fragmentation along ethnic lines.

Meanwhile, Elizabeth Cheney, daughter of former Vice President Dick Cheney, carried out a well funded operation on behalf of the International Republican Institute. The institute had historically been used to funnel money from the National Endowment for Democracy into foreign aid projects.

In August of 2003, former CIA agent Philip Agee, tied the International Republican Institute to both the National Endownment for Democracy and the CIA.

Elizabeth Cheney had gone to Iran on an overt operation on behalf of the US State Department and MEPI, the Iran Middle East Partnership Initiative, as well as ISOG, the Iran Syria Policy and Operations Group. In that capacity she had millions of US dollars at her disposal for propaganda using radio outlets like the US owned Radio Farda and Voice of America.

The US continued its covert operations at the Iraq/Iran border, even using the Mujahideen-e-Khalq (MEK) [also spelled: 'Mojahedin Khalgh Organization' or 'MKO'] which had been listed as a terrorist organization by the US State Dept. [See also, Jeremy R. Hammond, Foreign Policy Journal, 'Has the U.S. Played a Role in Fomenting Unrest During Iran’s Election?' and also, Biden Vows to Continue Bush Policy Towards Iran, by Jeremy R. Hammond.]

The US and Europe also declassified the MEK as a terrorist organization, leading some to wonder about possible ongoing intelligence roles involving the group.

Members of Congress have been arguing for military attacks on Iran, and have set forth numerous bills that would effectively place America on a war footing with Iran.

See this piece too on the vote count in Iran.
'A Hard Look at the Numbers', By Esam AL-Amin, Counterpunch. 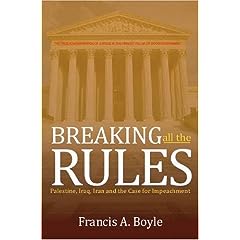 Francis A. Boyle practiced tax and international tax with Bingham, Dana & Gould in Boston. He has written and lectured extensively in the United States and abroad on the relationship between international law and politics. His eleventh book, Breaking All the Rules: Palestine, Iraq, Iran and the Case for Impeachment was recently published by Clarity Press.

Other Books by Francis. A. Boyle here.

Posted by Talk Nation Radio at 10:29 AM No comments: