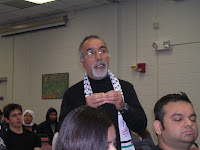 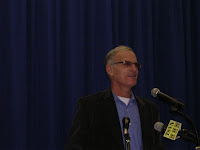 Listen to this week’s show here or download below. Listen to part 2 of the talk by Norman Finkelstein at the University of Connecticut 4-7-09 here
..download below.

Norman Finkelstein spoke about Gaza in context with the history of Israel’s occupation of Palestinian land. In part one we begin with an interview with Dr. Saeed Ahghari just after his return from a visit to Gaza where he worked as an emergency medicine specialist treating wounded and assessing the crisis for civilians.

Produced by Dori Smith, WHUS, Storrs, CT
Download parts 1 and 2 at Archive.org here
or at Pacifica’s Audioport at the link below or part 2 at Radio4all.net

Download part one at Pacifica’s Audioport here
Or at radio4all.net and archive.org later today

We hear from Middle East expert Norman Finkelstein who spoke at the University of Connecticut April 7th as he talks about the history of Israeli policies leading up to the attacks on Gaza that began December 27th, and generated massive protests. In addition to attacks on a UN compound where 700 civilians were seeking sanctuary, Israeli troops also bombed a UN school killing some 40 people, many of them children. Amnesty International, Human Rights Watch, Physicians for Human Rights Israel, and other groups, are calling for an investigation into Israeli’s attacks on heavily populated civilian areas, direct attacks on women and children, and even emergency medical teams as they tried to apply lifesaving techniques. A growing number of people world wide have offered the assessment that the Israeli state was itself harmed by it’s own actions, though the US under Barack Obama has thus far continued to resupply them with heavy weapons despite requests from Amnesty International that they not do so.

First, we’re joined on the phone by Dr. Saeed Ahghari, an emergency medicine specialist who recently returned from Gaza where he helped treat the wounded after Israeli air and ground attacks in December and January.

Dr. Ahghari spoke at the Charter Oak Cultural Center Gallery, 21 Charter Oak Avenue, Hartford Connecticut on Saturday April 11th at 1 PM about what he witnessed in Gaza as he was offering medical care. 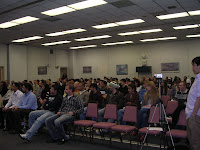 This is a nice looking group of students and community members listening to Dr. Norman Finkelstein give a talk about Gaza. The scholar also took many questions and a lively discussion ensued. There was only one person who sounded even slightly concerned about media reports on Hamas. She spoke quietly and respectfully about those concerns and the evening continued without any sort of problems....

'Clark President John Bassett canceled Finkelstein’s appearance, saying the timing was bad. The speech was scheduled for later this month on the same week as a Holocaust and genocide studies conference at the school. Bassett said Finkelstein may be back at Clark next year when the timing is better. 'letters can be sent to local papers and Boston.com has received quite a few.

Action: McCarthyism in America on the rise. The misnamed Anti-Defamation League (it is actually a defamation league) tried to get Michigan State University to cancel the invitation for Archbishop Desmond Tutu as a commencement keynote speaker. Thankfully they failed. On the other hand, Prof. Norman Finkelstein is a meticulous scholar of history and was barred from speaking at Clark University. http://www.boston.com/news/education/higher/articles/2009/04/10/clark_drops_holocaust_scholar/
Please put a comment at the bottom of the article above and send a polite but blunt letter to the President at presidentsoffice@clarku.edu and letters to the local newspaper letters@telegram.com Worcester Telegram and Gazette

Another photo of the audience at Norman Finkelstein's talk at the University of Connecticut: 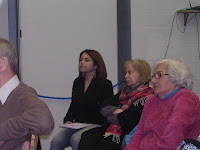 Labels: Norman Finkelstein at UCONN and an interview with Saeed Ahghari M.D. about his visit to Gaza to help wounded