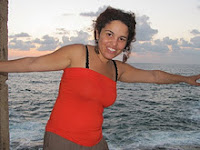 Human rights activist Johanna Rivera joins us to talk about her travels in the Middle East. She was in grad school at the University of Connecticut's School of pharmacy when she decided to visit the Middle East and it was a life changing decision. Her popular Blog is “A Journey Deep into the Struggle” and she’s used it to document her travels through Egypt, Palestine, Israel, and Iraq plus her efforts to promote human and civil rights for women and children as well as protesters. She is currently doing public speaking in New England but plans to return to Iraq. A Puerto Rican born American, Johanna Rivera, took time away from her studies to join the Gaza Freedom March in Cairo in 2009 as protesters took to the streets with a then unknown local protest movement. In Cairo she sparked concern for those at home when police roughed her up during a peaceful protest.

Produced by Dori Smith
TRT: 29:00
Download at Pacifica's Audioport here or at Archive.org

Johanna Rivera's journey then took her to Palestine where she worked at the Tent of Nations in the West Bank, an international peace center run by a Palestinian family, and then spent time in Israel working with an organization that empowers Israeli women of Palestinian background through education, employment and counseling. Ultimately, Johanna Rivera found herself in Iraq where she spent time in Erbil and Sulaymaniyah, both in the autonomous Kurdish region of Iraq near the Iranian border. Her work there was with refugee children and their mothers.

On her blog, “A journey deep into the struggle” she describes her first impressions of the camp. “The children’s messy, untidy hair reminded me of their reality as refugees, but their smiles and beautiful eyes lifted me up. I started to ask their names, and they all took turns to tell me their names. One of them clung into my arm and kissed it, my heart wanted to melt but I smiled and kissed her head back. It was very hot and dusty, and we were trying to set up the stage for the puppet show. It was just a colored banner in Arabic and English welcoming everyone, but it was meant to serve as an interface between the public and the actors. We laid some blankets in the dusty ground for the audience to sit overlooking the mountains.”

Johanna Rivera’s blog has news worthy observations as well. She may document an attack on protesters one day, then on another she describes the changes she can observe to a community of Christians in Erbil who arrived in Kurdistan after their church was bombed in Baghdad. The blog also a platform for her to describe the many people she connects with as she spends time in the Middle East. There are many high quality photographs of them, and her personal revelations about how the land and its people were affecting her.

On March 14, 2011, Johanna Rivera puts a photo of protests in Sulaymania province on her blog, and translates one of the banners. It reads, GO OUT, the words and chants directed at President Massoud Barzani and the KDP party, Kurdistan Democratic Party. (Click here for a YouTube video we used audio from in this program.) 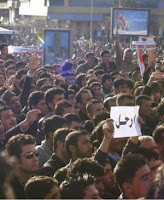 She writes: “There have been demonstrations in Sulaimanya-the second largest city in Kurdistan and cultural capital- since the past three weeks, when citizens of Kurdistan took to the streets to demand jobs and the end of corruption. About 8 people have died so far and more than 200 have been wounded in clashes between protesters and heavily armed militia forces linked to the two ruling parties of Iraq's semi-autonomous Kurdish region. The ruling (KDP) government did not condemn the killings of civilian perpetrated by its own militia, while Mr. President Massoud Barzani, was receiving the Atlantic Peace Award in Italy.”

Posted by Talk Nation Radio at 9:16 AM