We continue to look at the science and what hundreds of thousands, probably millions of barrels of oil flowing into the Gulf of Mexico is doing to the ecosystem.

The photo is from Deep Sea News blog. Stay tuned for upcoming interviews with: Dr. Ed Overton, LSU, taped 7/2/10, air date as soon as edit permits, Dr. Samantha Joye, University of Georgia, scheduled for next week. Contact us at talknationradio@gmal.com.

Produced by, Dori Smith
Download at Pacifica's Audioport here or at radio4all.net and at Archive.org

Dr. Craig R. McClain at McClain Laboratories, is Assistant Director of Science at the National Evolutionary Synthesis Center, in Durham North Carolina. He has been researching the deep waters of the Gulf of Mexico and other locations for 11 years, studying the fascinating and often newly discovered life he finds there.

He blogs at Deep Sea News with fellow marine biologists Dr. Kevin Zelnio and Miriam Goldstein (PFD Goldstein soon to be Ph.D. Goldstein). McClain was raised in the Gulf Coast region and now works with his various scientific teams to study it. On their blog, McClain, Zelnio and Goldstein are working to help people understand the science of the BP disaster.

Photo by Times-Picayune, A. Boyd 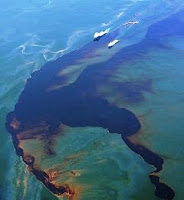 We'll also hear from BP's spokesperson Mark Proegler who took our questions on the amounts of oil we're looking at, and the dangers we face from the Gulf Coast of Mexico region, Louisiana, Mississippi, Florida, and all along the Eastern seaboard if the oil gets into the Loop Current. Proegler said it was not in the loop current, yet The Examiner says it has already entered it, as did this, this, and concern expressed on this news site.

After saying BP had allocated a large amount of funding for scientific research, BP's spokesperson would not commit to the way it will be allocated, and whether or not scientists invited into the recovery effort will have to be associated with the government/private sector effort, or Joint Task Force. He said the company has not said they will refuse claims from states further up the East Coast in the event that the oil is carried there in the Loop Current.

The arrival of hurricane Alex shut down relief operations near the Deepwater Horizon rig and throughout the region, as oil is now hitting precious marshes and fisheries in Louisiana hard, and making its way into Lake Pontchartrain Basin at the Chandeleur Islands and the Mississippi River Delta.

Oil has already had devastating impacts in the western portions of the Louisiana coastline and has contaminated Florida's white sand beaches. amid the chaos about what is really happening to the wildlife in the region, and what it means to us, we asked Dr. McClain what concerns him most about BP's oil spill, and he explained that it is the as yet unknown short and long term consequences of the disaster.

Oceanographers are increasingly concerned about high concentrations of methane in plumes of oil rising from the area near the blown drilling rig in the Gulf, the mixture of oil rising from a plume of oil a short distance from the rig is 40 percent methane and 60 percent oil, according to Oceanographer John Kessler of Texas A&M, Dr. Samantha Joye holds weekly press conferences and uses her blog, gulfoilblog.org to share data as it is recorded.

We have calls in to several other scientists and will provide their reactions to what BP has told us in upcoming broadcasts. Also, well known journalist Dahr Jamail is now reporting from the Gulf of Mexico, dahr.org for his stories, the latest from Louisiana is titled, living on a dying delta. (Click here for Dahr.org)

Blogs with scientific information about the BP oil disaster in the Gulf of Mexico: Gulf Oil Blog, Dr. Samantha Joye, University of Georgia.

hccreekkeeper | June 26, 2010 This was the most emotionally disturbing video I have ever done!
A flight over the BP Slick Source where I saw at least 100 Dolphins in the oil, some dying. I also photographed a Sperm Whale covered in oil all around it's blow hole.
Please spread this around the world. Send me any links to places it gets posted so I can follow. I want to piss off the world. Who will answer for these gentle creatures?