UPDATE: See transcript of 6/15 speech below. The President was very critical of MMS, Minerals Management Service, and a new leader has been appointed to head the agency. Here we see part of the nature of the problem. There was a sense of emergency to get oil resources for the US, and MMS appears to be doing PR for the general idea of how good an idea this deep water drilling was. Note the paragraph on: "Massive blowout preventers, some 45 feet high and weighing 320 tons, are installed on the ocean floor to protect the environment from the threat of an accidental deep water oil release. Remotely controlled robots operate effectively in the high pressure, cold and dark environment of the ocean bottom to construct, maintain and repair costly drilling equipment. New drill ships capable of carrying the tons of necessary pipe and other drilling equipment have been constructed to support deep water operations. These ships are specially equipped with thrusters controlled by computers and geospatial positioning systems to maintain their position and reduce tension on their riser systems". -- They were 100% bought in, and clearly part of the problem as Attorney Patti Smith said during our interview.

Updates on emergency efforts video of shear cut off here, and updates or info: here,here

Download at Pacifica's Audioport here or at Radio4all.net and Archive.org. 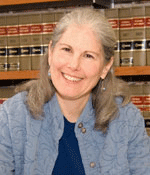 The BP Spill, litigation, and health dangers from Pesticides 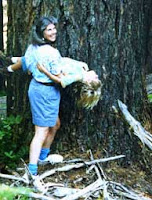 Earthjustice attorney Patti Goldman here uses her 4-foot tall son Martin to "measure" a tree in Siskiyou National Forest. The grove harboring this tree was saved by her work with Earthjustice.

Patti Goldman,Vice President of Litigation at Earth Justice Environmental Law, joins us to talk about litigation involving British Petroleum, BP. Earth Justice filed a Freedom of Information Act request on Friday, May 29, 2010, (see FOIA below) seeking the full contents of the Corexit chemical dispersant being poured into the Gulf of Mexico by BP. The manufacturer, Nalco, and BP, have made all of the ingredients in Corexit public, but has released the information that it may contain cosmetic products and/or stain blocker chemicals in Corexit. (See this page for health risks.)

The chemical is supposed to break up the oil that has been destroyed fishing along Louisiana’s coast. Yet, some scientists worry that it may be more dangerous over the long run than the oil itself. Concerns have also been raised that the dispersant chemical has sent the oil much further into the ocean surrounding the Gulf of Mexico. Presently, the oil is moving toward the Florida coast.

BP is under criminal investigation by the US Justice Dept., and its not the first time. After a spill in Prudhoe bay in 2006 because of pipeline corrosion, and a faulty shut down valve, the company was fined put on probation for three years. A year later 15 workers died and 170 were injured in an explosion linked to safety violations at a BP facility in Texas, again BP was placed on probation. You can read more about the history at Truthout.org in a May story by Jason Leopold. UPDATE at Bloomberg, re Jason Anderson, manager killed on Deep Water Horizon. He was worried about safety, felt pressured. "Jason Anderson talked of his concerns about BP putting rising pressure on the crew to bypass safety precautions during the seven-day shore visits he was allowed between three-week stints aboard the Deepwater Horizon, said Billy Anderson, who’s been involved in the oilfield-services equipment industry for 35 years".

Patti Goldman has also been working on a longer standing crisis created by the massive use of pesticides throughout America. Old data showed them to be dangerous to neurological systems, a new study showed the presence of markers for organophosphates in the urine of children with ADHD.