Crisis at Sea, Gaza Ships attacked by Israeli Commandos
Who was arrested, or has been on board: see 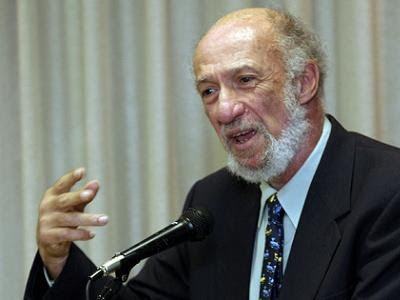 
TRT: 29:18
Produced by Dori Smith
Download at Archive.org and Radio4all.net

McClatchy obtains Israeli document "By Sheera Frenkel | McClatchy Newspapers, JERUSALEM — "..."In response to a lawsuit by Gisha, an Israeli human rights group, the Israeli government explained the blockade as an exercise of the right of economic warfare. --- "A country has the right to decide that it chooses not to engage in economic relations or to give economic assistance to the other party to the conflict, or that it wishes to operate using 'economic warfare,'" the government said".
Read more: http://www.mcclatchydc.com/2010/06/09/95621/israeli-document-gaza-blockade.html#none#ixzz0qYUheaDP

UPDATE 6/11/10: The Israeli commando forces clearly engaged in fire very early on in their boarding of the Mavi Marmari. This new video is described as 'uncut' and comes from Brazilian filmmaker, Iara Lee. She was able to get her live footage out despite the fact that her camera and film were confiscated by Israelis when they took her and all of the other passengers into custody. She sent it to others working on the Gaza Freedom Flotilla project. Democracy Now featured portions of the video on their daily news hour here. According to one of the hosts, Juan Gonzales, there are dozens wounded.

Nora Barrows Friedman writes "Four days have passed since the outrageously illegal and lethal Israeli raid on the humanitarian aid flotilla, as the blood dries, the facts are boiling to the surface. And they don’t look good for Israel". She posted a few paragraphs of a piece by Max Blumenthal from Tel Aviv:

"Statements by senior Israeli military commanders made in the Hebrew media days before the massacre revealed that the raid was planned over a week in advance by the Israeli military and was personally approved by Prime Minister Benjamin Netanyahu and Minister of Defense Ehud Barak. The elite Israeli commando unit known as Unit 13 was tasked with carrying out the mission and its role was known by the Israeli public well before the raid took place. Details of the plan show that the use of deadly force was authorized and calculated. The massacre of activists should not have been unexpected".

"On May 28, three days before the raid, top Israeli military officials revealed details of their strategy to Maariv, Israel’s most widely circulated paper. The caption of the Maariv article reflected the military command’s plan to use force: “On the way to violence; one of the boats is on its way". See, The Flotilla Raid was Not Bungled, Max Blumenthal.

Bradley Burston at Haaretz has interesting Haaretz blog post: "On Sunday, when the army spokesman began speaking of a Gaza-bound aid flotilla in terms of an attack on Israel, MK Nahman Shai, the IDF chief spokesman during the 1991 Gulf war, spoke publicly of his worst nightmare, an operation in which Israeli troops, raiding the flotilla, might open fire on peace activists, aid workers and Nobel laureates".

7:00 PM EST: Concerns mounting re disinformation campaign by Israel, difficult now to locate all press reporting from Israel, which is on lock down.

INTERVIEW: Reaction from Dr. Stephen Zunes, chair of the program in Middle Eastern Studies and Professor of Politics and International Studies at the University of San Francisco. He is a senior policy analyst for the Foreign Policy in Focus project of the Institute for Policy Studies. And author of several books on the MidEast and international social movements on the region, including Tinderbox, and NonViolent Social Movements.

Freedom Flotilla Attacked by Israel, troops land shooting. as of 4:49 PM Eastern Time, an update here at Truthout.org. Also note that Mosaic, LinkTV, and Democracy Now will be covering this story intensively, check their sites for video updates.

"We expected that they might try to stop us, they might try to board us. We never expected that they would shoot. What they didn't understand is that when they came on board the Turkish ship we had live streaming video. So when they landed, and they came off the helicopter, you can see them come off the helicopter, turn around, look at each other and start to shoot. Now, this is at 4:30 in the morning this morning when everybody is asleep. There was no resistance, there was nobody there who was threatening them..." Greta Berlin, a founder of Free Gaza Flotilla.

Even Israel has backed down on earlier comments that there were weapons, according to Free Gaza's, Greta Berlin.

They repel down to Italian vessel, at least 16 and possibly as many as 20 dead, 50 to 80 people are said to be wounded.. we hear from Greta Berlin, founder of Free Gaza, as she give us breaking news on events on board the Turkish passenger ship, the Mavi Marmara, and a European vessel, both attacked, and towed by Israel. Some 700 people detained by Israel. They did not have weapons, states Berlin. And Israel has confirmed that this is the case. No weapons. Broadcast available here. This interview includes part of a longer interview with Prof. Stephen Zunes, (length: 29 min) upload asap on that.

Confirms, European Campaign Vessel also attacked, the Spendoni. No word on deaths/injuries there and still no word on NAMES OF casualties as of 9:00 AM EST US. Confirmation that Sheik Salah is in detention.

We are trying to get whatever information we can for a Talk Nation special on events in international waters off Gaza. As many as 15 people are said to have been killed, dozens wounded, after Israeli commandos stormed an Italian vessel with the Gaza Peace Flotilla. Democracy Now has an interview here.

This is a photo from the web site of the Israeli Foreign Ministry. The description reads: "During a search aboard the maritime vessel Mavi Marmara, IDF forces uncovered a cache of weapons--used to violently attack the soldiers".

A wrench, a come-along, and other items commonly found on ships, described by Israel's Ministry of Foreign Affairs as "weapons". Originally, Israelis claimed there were "pistols" on board the Turkish ship but according to Greta Berlin of the Free Gaza Flotilla movement, those claims were officially retracted. Years ago when the administration of Ronald Reagan and George H. W. Bush were supporting the repressive regime created by Roberto d'Aubuisson, in El Salvador, 60 humanitarian aid workers were taken into custody. They were lay church workers from America working alongside El Salvador's peasants who used churches for safety from death squads. When they were snatched by government forces and taken into detention, roughed up, the El Salvadorans tortured, U.S. officials passed along the El Salvadoran Govt. claim that they had "weapons" in the basement, "sharp sticks" and "gasoline" and other items that could not be called humanitarian. The ridiculous assessment was provided to protesters of the arrests who had gone to the offices of U.S. Sen. Chris Dodd in Wethersfield. People were hiding in the basement to avoid being disappeared, a common practice at the time, one that the US might have ignored had it not been for courageous Americans who visited El Salvador to serve as witness to the atrocities.

During a Talk Nation Radio interview May 31, 2010, Stephen Zunes compared international efforts to help Latin Americans during the 1980s and 1990s to efforts underway today to help Palestinians.

The US State Dept. is working on a statement now, after receiving messages in "bits and pieces" out of Tel Aviv, according to spokesperson Fred Lash. He said he was not in a position to confirm that Turkey has withdrawn its ambassador from Israel. We will have an update asap.

Quotes: PRIOR to the shootings

"This is nothing more than media provocation and has nothing to do with actually providing aid to residents of the Gaza Strip," said military spokeswoman Lt. Col. Avital Leibovitch. "They have everything they need."

Speaking at a Monday news conference in Tel Aviv, Ehud Barak called the aid flotilla a "political provocation" by anti-Israel forces. He said the sponsors of the flotilla are violent.

Al Jazeera video, Live Coverage here: their reporter on board Gaza Freedom Flotilla ship says Israeli commandos still shooting. White Flag Raised. As many as 16 people may be dead. 1:59pm: The Israeli army has released its first official version of today's events, including an aerial video of the first commandos landing on the Mavi Marmara. The IDF statement says the commandos "first employed riot dispersal means, followed by live fire."

Haaretz updates: Muslim leader Raed Salah may be among the dead. see Maan New Agency here too that he was shot on the head. Earlier reports listed him as wounded, Israeli officials saying he lived injuries sustained when Israelis opened fire. 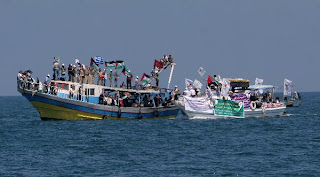 Live image from the flotilla shows that Israeli soldiers from the helicopter and a number of speedboats boarded one of the ships at night. Activists wearing life vests were treating what appeared to be injuries for unknown reasons.-- Israeli navy on Sunday night sighted the pro-Palestinian “Freedom Flotilla” bound for the Gaza Strip and ordered the convoy to dock at an Israeli harbor. -- The flotilla, originally made up of nine ships from Turkey, Britain, Ireland, Greece, Kuwait and Algeria, were carrying around 10,000 tons of aid including cement, water purification systems and wheelchairs. One of the ships had not arrived and two others had been damaged.

Posted by Talk Nation Radio at 4:23 AM