Mutual Aid Disaster Relief Haiti Continues with Roger Benham, part two of our discussion about the relief efforts in Haiti 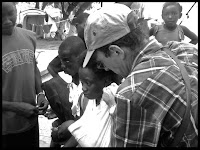 Physicians working in Haiti are praising the group, Mutual Aid Disaster Relief Haiti and volunteers like our guest, Connecticut EMT Roger Benham. The wounds treated by the team have been in perfect condition after the fast response they made, and the ad hoc team that caught rides into Haiti with other groups has treated hundreds of people.


TRT: 29:45
Produced by Dori Smith
Download at Pacifica's Audioport here if you are a broadcast member or at Radio4all.net and Archive.org free each week.
Talk Nation Radio is syndicated with Pacifica Network and airs weekly on a variety of stations. See our list on our web site.

Roger Benham returned from Haiti February 2nd after using his unique skills as a street medic to help earthquake victims. He is trained to deal with a wide variety of emergencies and his ad hoc group, Mutual Aid Disaster Relief Haiti, has become highly capable after working in New Orleans after Hurricane Katrina. At that time the group's members were working as part of Common Ground Relief. They helped set up a highly successful medical clinic in the 9th Ward that is still in operation.

His experience in New Orleans helped prepare Roger Benham for the crisis within the crisis, for the many misunderstandings that arose due to a long standing lack of sound press coverage on the Haitian people and their culture. We discuss the media in context with the three stages of rescue and relief. Benham also shares a story of helping one Haitian woman who was stoic as he cleaned her serious leg wound. Kembe Fem, (phoenically spelled) in Creole means "stay strong" and he explains how he was impacted by his experiences.

See last week's show, part one of this discussion here including our interview with Suncere Shakur: www.mutualaiddisasterrelief.org
Group will continue to support efforts in Haiti, especially those of BAM, Moving Heaven and Earth for Haiti, Suncere Shakur's group working with orphans and others in need.

Clips: (January, AP, Associated Press, Channel 4, London, Jonathan Rugman, Fox News, Haiti.) We're listening to the sounds of a crowd reacting to a French rescue team that pulled a 17-year-old student, Darlene Etienne, from the rubble 15 days after the quake. Miraculously, Etienne was in stable condition. Aid workers trying to shield her from the cameras as the crowd applauded. These are the kinds of dramatic stories that have inspired people all over the world, but it's been an emotional roller coaster ride.

News agencies that could have called attention to the desperate need of hundreds of thousands for food and water in different parts of Haiti, spent their precious air time playing up the drama of individuals being rescued. However, British TV took a different approach. One week after the Haitian earthquake, Channel 4 News interviewed Dr. Alphonse Edward of the Dominican Republic. He had been treating thousands just one mile from Haiti's airport, and could see the mountain of aid supplies piled on the tarmac, yet his clinic in the trees with IV bags hung from branches was getting nothing. People were dying from dehydration, exposure, and their wounds, with the supplies that could have saved them sitting just minutes away. (Democracy Now also had this story.)

As of late January, press coverage was just starting to shift to the drama of American forces landing in Haiti, and instances of looting that justified their presence as more of a security force.

A Fox news team introduced a segment by Geraldo Rivera, who said he stumbled upon a bank robbery in progress...It was hard to know how Rivera could have stumbled upon the robbery and yet would have known that millions had been stolen. We had trouble verifying that cash was looted from a CitiBank location in Haiti.

There were stories of US soldiers refusing to enter hard hit areas due to security concerns, and in some cases there were aid workers and soldiers throwing aid at Haitians in the streets without even stopping vehicles. The tactics so infuriated Haitian Senator Jean Joel Joseph that he told AP: "It is true we are in need," he said, "But don't treat us like dogs. We ask the prime minister to ask the foreigners to reorganize the way this aid is being distributed."

Channel 4 News, 20 January 2010 Jonathan Rugman, aid piles up at airport, people dying nearby as they cannot access it.

January 17, 2010, Fox News coverage, Geraldo Rivera, observed Citibank looting, millions stolen he says, but we cannot find evidence in follow up that this was the case. Calls in to Citibank result in strange responses, phone numbers that do not work.

Do you want to help in Haiti? Are you a Registered Nurse or do you have other skills? Check out the Mutual Aid Disaster Relief web site:

Madrih's web site notes: "Some French and a good deal of Haitian Creole is needed. (Editor's note: Audio courses in Haitian Creole are available for free from audible.com at http://bit.ly/d6NsPc and http://bit.ly/a4BTWG .) She recommends flying into the Dominican Republic, spending a night on the border, and entering Haiti in the morning".

Posted by Talk Nation Radio at 9:52 AM