Produced by Dori Smith
TRT:29:49
Download at Pacifica's Audioport here if you are a member or go to Radio4all.net and Archive.org for free download information. 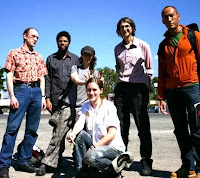 Emergency Medical Technician and Action Medic, Roger Benham, returned from volunteering in Haiti on February 2nd and he joins us for part one of a two part special on relief efforts there. The US Military arrived expecting violence and as a result the aid was held up at the airport while security measures were sorted out. Roger Benham is part of Mutual Aid Disaster Relief. They arrived in Haiti during the first week after the quake, anticipated the needs people would have and worked to simply meet them. Their success stories are an inspiration.

After the January earthquake in Haiti, community organizer and activist Suncere Ali Shakur founded the ad hoc group, "Being Able to Move Heaven and Earth for Haiti," or BAM. The BAM web site will soon be up, meanwhile go to Mutual Aid Disaster Relief for information.

When we last spoke with Shakur he was fund raising and coordinating media and aid for eleven groups doing work for Haiti including Mutual Aid Disaster Relief, a group whose members largely consist of members of Common Ground Relief. But Shakur's life has just taken a remarkable turn. The lives of 19 young Haitian orphans will now be a part of his life and Haiti's future. For now we might call them the Shakur 19.

The "19" are Children ranging in age from 1-week-old to 6-years-old. They had no parents, and no names when Suncere Ali Shakur first learned about them. Now they have Shakur's last name and he is gearing up to be a father to them and more. He has committed to the goal of providing good lives, education, and security for the kids, and he and a team of other volunteers already have plans to build them a home in Haiti.

For Haiti relief in general, Checks can be made out to:
Artistic Evolution Inc///Dedicated Haiti Relief Account
(Mutual Aid's 501(c)(3) fiscal sponsor)
http://www.mutualaiddisasterrelief.org/

The Mutual Aid Disaster Relief team, MADr, is a network of groups committed to working in solidarity with the people of Haiti. Their first team arrived shortly after the earthquake and began offering the same kind of program this group set up for New Orleans after Hurricane Katrina. At their web site, http://www.mutualaiddisasterrelief.org you can read updates from volunteers in Haiti.

"Speaking of Partners In Health, their doctors rotated out of the country on Sunday, with the next PIH team due in on Wednesday. This has left a 4-day window with no team of doctors at the hospital... meaning Team Montana is working with the Haitian nurses to take care of ALL of the surgical patients and most everyone else at the hospital. One of the biggest issues is that the PIH doctors are the best in their respective fields in the US and are pulling off major, life saving surgeries - including skin grafts - in what's basically a "country hospital," leaving patients with gigantic surgical wounds - both traumatic wounds and surgical wounds - in a less than ideal environment. It's important to remember that this hospital does not have an EKG or an AED, let alone an ICU ward. The team feels very strongly that if they weren't there for this window of time, at least some of the patients would have ended up with massive infections, if not worse.

The hospital is a very real place, for lack of a better way to put it. Patients generally come with their families. Their families bring the bed linens, take care of meals, etc. The hospital is just FULL of people, and any time a patient passes away, the grief just spreads like fire beyond their family and into the streets. That said, the team is holding it down, working all day doing all sorts of care. Two ED nurses from a missionary organization showed up a couple days ago, and they've been helping out a lot too".

write to us at talknationradio@gmail.com