David Rovics on the Music of Political and Economic Activism

David Rovics on the Music of Political and Economic Activism 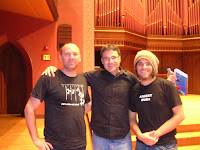 (Photo, David Rovics, Dahr Jamail, Paul Blasenheim, 9-21-09 at Memorial Chapel after a concert there, Wesleyan University, Middletown, CT) David Rovics is on an international tour, and he met up with Dahr Jamail briefly in Connecticut where they shared the stage at Wesleyan University. Prior to his arrival we spoke with Rovics by phone to discuss his tour and the significance of sharing a stage with Dahr Jamail.
First we hear a clip of Dahr Jamail answering our question at a press conference regarding the Obama administration's leak on the Afghan War. Jamail says that while there may seem to be discussion going on about Obama policy, and how badly things are going in Afghanistan, the plan is really set, and discussion now is more to get people to accept it.

We remastered the audio in this show on Sat. PM due to a sound imperfection. We hope this is better and we regret that the previous upload had problems. Please replace all posted files.

We hear portions of songs from David Rovics' new CD Ten Thousand Miles Away including, Falluja written in 2008, Brad, (for Brad Will, a journalist shot to death in Oaxaca City, October 27, 2006) and World of Broken Dreams.

Cindy Sheehan described David Rovics as 'our peace poet, and a troubadour of our time'. With his three year old daughter at his side, Rovics discusses his music, the things that are on his mind such as the inequities between rich and poor in the world, and the differences between American versus European political activism.

David Rovics has shared the stage regularly with leading intellectuals such as Howard Zinn, Noam Chomsky, Billy Bragg, the Indigo Girls, Martin Sheen and Susan Sarandon. He has been called the musical voice of the progressive movement in the US and Democracy Now's Amy Goodman has called him "the musical version of Democracy Now!" His music is available for download free of charge at his web site http://www.davidrovics.com/

David Rovics returns to Connecticut September 30, 2009 for a concert at The Wrench in the Works, 861 Main Street, Willimantic, CT at 8PM. Then he heads to Pittsburgh for concerts at events held there during the G20talks.

Labels: David Rovics on the Music of Political and Economic Activism