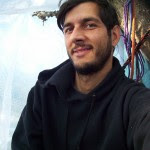 Tristan Anderson
Tristan, friend of Brad Will, has been critically wounded with "brain" visible after being shot in the head by a 40mm IDF shell. see story by Joshua Trost, इन्द्य्मेडिया

UPDATE
4-07-09 video of incident, shows medics rushing out with stretcher, clearly defined as medical team and they hold up an orange stretcher indicating they are about to retrieve a wounded person. Israelis then shoot another canister leaving them to struggle to breath while engaging in emergency medical assistance procedures. This seems very similar to the reports from Ran Yaron of Physicians for Human Rights, Israel.

UPDATE 3-19 ---- American shot in Ni'lin by Israeli Defense Force, surviving on life support. PSN --- Tristan’s girlfriend, Gaby, who has been tirelessly by his side, reports that he is doing much better. When the doctor asked him to put up two fingers he did so. Tristan recognizes Gaby and can squeeze her fingers in answer to different questions. He’s started his moving toes and his torso around a bit. The question is, why have US newspapers and other forms of mainstream or corporate media ignored this story? A US citizen is in a hospital on life support and the press has not reported it? Democracy Now has been covering the story and Stan Heller of The Struggle is also following it.

13th Friday 2009, Ni'lin Village: An American citizen has been
critically injured in the village of Ni'lin after Israeli forces shot
him in the head with a tear-gas canister.

Tristan Anderson from California USA, 37 years old, is currently being
taken to Israeli hospital Tel Hashomer, near Tel Aviv. Anderson is unconscious and has been bleeding heavily from the nose and mouth. He sustained a large hole in his forehead where he was struck by the canister.