Author, activist, organizer, on the ever expanding Occupywallstreet movement and www.october2011.org in Washington D.C. at Liberty Plaza, near KStreet and the seat of both U.S. governmental power and Washington’s lobbying cartels.

The occupation of Wall Street has expanded and now includes dozens of American cities. We spoke with David Swanson as activists arrived http://www.blogger.com/img/blank.gifin Freedom Plaza. We talk about the movement of “freedom squares” and occupations is spreading across the nation. (See also Occupy Together).

TRT: 29:00
Produced by Dori Smith in Storrs, CT and syndicated with Pacifica Network
Music of Fritz Heede
Download at Pacifica’s Audioport here and at the archive: here or at Radio4all.net and Archive.org 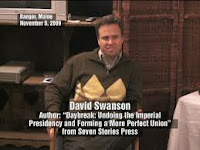 David Swanson is author of the book, War is a Lie, and more recently Daybreak in America. He has worked a seeming 24 hour shift documenting events at Occupywallstreet, organizing and agitating for democracy. The media hoped to cover them, get a quick sound bite to define them, and move on. But occupywallstreet has gone national, and any efforts by media to portray them negatively have backfired, though they are clearly something new.

David Swanson spoke at the Rebuild the Dream Conference. You can view his speech here.

We chose October 6th because the Afghanistan War was due to begin its second decade. Over 4,000 people have taken this pledge: “I pledge that if any U.S. troops, contractors, or mercenaries remain in Afghanistan on Thursday, October 6, 2011, as that occupation goes into its 11th year, I will commit to being in Freedom Plaza in Washington, D.C., with others on that day with the intention of making it our Tahrir Square, Cairo, our Madison, Wisconsin, where we will NONVIOLENTLY resist the corporate machine to demand that our resources are invested in human needs and environmental protection instead of war and exploitation. We can do this together. We will be the beginning .”

See also: Drones Have Their Own Congressional Caucus, Do You? by By David Swanson