UPDATE on Davis case provided by Troy Davis supporters and family: On Monday, September 19th, the Georgia Board of Pardons & Parole, under Chairman James E. Donald, will decide whether to execute Troy Davis. For your part, stop them from killing this innocent man. Contact Chairman James Donald and stop the Troy Davis execution. Demand that the board pardon Troy Davis. Call and write to the board at the following address and stop this legalized lynching! Their address is: Georgia State Board of Pardons & Parole, 2 Martin Luther King Jr. Drive, S.E.
Suite 458, Balcony Level, East Tower, Atlanta, Georgia 30334-4909, (404) 656-5651 (press 0 for operator, then 5 for “PARDONS”).

Award winning filmmaker and author Jen Marlowe and Georgia State University Law Professor Anne Emanuel (bio here) join us for a discussion about the history of the case and the evidence against Davis. (We have more audio of these interviews which we are editing now.)See www.JusticeForTroy.org

'The case against Troy Davis, when compared to other death penalty cases across the country, is extraordinarily weak,' said Georgia State University Law Prof. Anne Emannuel, 9-7-2011.
Produced by Dori Smith
TRT: 29:00
Download at Pacifica's Audioport here or at Radio4all.net and Archive.org
Music by Fritz Heede

In two weeks, on September 21, 2011, the State of Georgia plan to execute Troy Davis despite the massive international support for his campaign to prove his innocence in the murder of Georgia policeman Mark MacPhail.

Attorney Anne Emanuel joined us. She teaches Criminal Law and Capital Punishment law at Georgia State University school of law, and is author of a 2006 report on the death penalty in Georgia. She has said “a verdict that is not ironclad is not good enough to support a death penalty” and she is familiar with the Troy Davis Case. Anne Emanuel also served as Chair of Georgia's ABA Death Penalty Moratorium Implementation Committee. The work culminated in the publication of Evaluating Fairness and Accuracy in State Death Penalty Systems, The Georgia Death Penalty Assessment Report. From 2004-06, she served as Associate Dean for Academic Affairs at the College of Law.

Books: Jen Marlowe is author of Darfur Diaries, Stories of Survival,about her travels to Northern Darfur and Eastern Chad, and The Hour of Sunlight: One Palestinian’s Journey from Prisoner to Peacemaker. Her award winning films include: Darfur Diaries, Message from Home, and Rebuilding Hope, which follows three Sudanese-American young men on their first homecoming trip back to Sudan, to discover whether their homes and families survived the civil war and to build a school, drill wells and bring medical supplies to their villages in Sudan. (Books can be obtained here.) You can find her film series about Troy Davis on youtube. 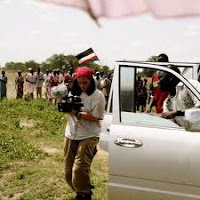 This will be the fourth time that Troy Davis is facing an execution date, points out Jen Marlowe, explaining that this time they are looking for clemency because of the doubt that exists about the case. She said: 'The setting of the execution date actually sets into motion the clemency process. The Board of Pardons and Parole, unlike a court which is bound by procedure--they are able to make choices based on what is the ethical thing to do, what is the right thing to do. So we have a lot of hope that the Board of Pardons and parole in Georgia will see that in Troy's case there is overwhelming doubt. And there are significant questions as to Troy Davis' guilt. I would say more than significant questions and so there is a lot of hope that they will do the right thing and they will grant Troy clemency, which basically means mercy, and it means taking him off of death row. They can commute his sentence to life without parole in prison which certainly is not what Troy wants ultimately. He has always maintained his innocence and so he does not want to be in prison for life without parole. But of course you can eventually free a wrongfully convicted man from prison, but if he is executed you can't free him from the grave. So we have great hope that the Board of Pardons and Parole will grant him clemency. And that's really where all of our efforts are now, on trying to let the Board know that there are thousands and thousands of people worldwide who are watching this who are very concerned about an execution proceeding when there is so much doubt.' Jen Marlowe

The Original Prosecution and Trial of Troy Davis was Error Prone. Police later withdrew the only physical evidence they had, a bullet which they had argued would 'prove' Davis was the killer. See case outlined here in press coverage over the years.

As to the individuals who prosecuted and convicted Troy Davis: Back in 2007 we spoke with the original prosecutor in the Davis case, and asked him whether or not he had conducted an investigation into Sylvester Redd Coles, who has become a person of suspicion to many who have been studying the case. Coles was at the scene of the murder, and had a gun of the same caliber as the one used to kill Officer McPhail. Yet Spencer Lawton told Talk Nation Radio that the fact that his attorney “allowed” him to go to the police station alone to discuss the murder on the day afterward, indicates his innocence. But did Coles have his attorney present when he went to the station or didn't he? Jen Marlowe says he did, and she also points out that Coles should have been investigated more fully because in his culture being a snitch is thought of as something you just don’t do. Coles went to the police and fingered Troy Davis. Why? Why didn't this unusual behavior for someone like Coles send up a red flag for police and DA Lawton?

The Innocence Project mentions these issues in their brief written on behalf of Troy Davis, see this PDF.

Over the years that this case has been discussed legal analysts and rights activists have pointed out that this kind of behavior has come up before in law. In a friend of the court brief, The Innocence Project PDF file cites the case of Kyles v Whitley, where the 'U.S. Supreme Court reversed a defendant's capital murder conviction because evidence withheld by the prosecution about the state's informant strongly suggested the informant committed the crime'. They describe Coles as the "likely killer" and say he had the most to gain and state: "The primary reason that Troy Davis became a suspect in Officer MacPhail's murder was Sylvester Coles. The day after the shooting, Coles approached the police with his lawyer in tow and implicated Troy Davis. Tr. vol. IV at 915-18, 949. Coles had the most to gain by doing so--he was the most obvious suspect in both the assault on Larry Young and subsequent shooting. Affidavits from new witnesses and from persons who have since heard Coles confess make clear that Coles is the likely killer of Officer MacPhail."

They also argue that, "Ten eyewitnesses and two informants testified against Troy Davis at trial. An astonishing nine of those twelve have revealed in subsequent affidavits that their testimony was false or inaccurate. These recantations have cast light on the improper procedures used by police to secure eyewitness identifications and testimony against Troy Davis, and the personal motivations of the informants to fabricate his alleged confessions."

Also, Marlowe discusses other comments made by Spencer Lawton who has claimed that none of the witnesses had tried to ('back up" at trial) recant earlier. Lawton has indicated that this seemed to him to indicate they were not credible in their recanting of testimony. Marlowe further clarifies the story of a witness who did try to correct the record during the trial. (We also mention that we found a recording of an appeal hearing where the Assistant DA David Lock, refers to witnesses who had tried to recant at trial: “There were some witnesses that backed up a little bit at trial”).

An execution warrant for Troy Davis has just been issued tonight. His execution is scheduled to take place on September 21.
We have known that an execution date for Troy was inevitable. An execution, however, is not. The Georgia Board of Pardons & Parole can still prevent this execution by granting clemency. We expect that a clemency hearing will be held in the days prior to the execution date and we remain hopeful that the board will do the right thing and grant Troy clemency.
Troy has been on death row for 20 years for the 1989 murder of police officer Mark MacPhail. Since his conviction, the case against him has completely fallen apart. There is no physical evidence linking Troy to the murder, 7/9 eyewitnesses have recanted or contradicted their testimony, and 1 of the remaining witnesses has been implicated as the actual shooter. There are scores of unresolved questions about what actually happened the night of the murder. Only one thing in Troy’s case is crystal clear: there is overwhelming doubt. And, in the words of GSU law professor Anne Emanuel, “A verdict that is not ironclad is not good enough to support a death penalty.”
For a more complete explanation of what exactly we mean when we say, “there’s too much doubt,” please watch (and circulate) this video series, examining the case in-depth.

What you can do:

Sign the petition to the Georgia authorities asking them to grant Troy clemency and encourage others to do the same.

Members of the clergy (all faiths): endorse a clergy sign-on letter to the GA Board of Pardons & Parole (non-clergy: encourage friends in the clergy to endorse.)

Work on organizing an event for the International Day of Solidarity for Troy Davis. (check back tomorrow at www.JusticeforTroy.org for the exact date.)

For the sake of justice, we can and must act now. Please check www.JusticeForTroy.org to keep up with latest developments.