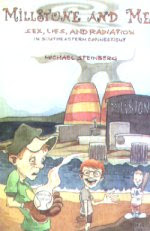 Fukushima, the final warning, Michael Steinberg:The Children of Japan test Positive for Radiation Poisoning The people of Japan are appealing for international attention, and help. At the web page NIRS.org you can sign a petition to protect Japan’s children, as the extent of contamination to soil, food, air and water, are only now being revealed. We hear a portion of a broadcast by the Australian Broadcast Network, ABC.


Produced by Dori Smith in Storrs, CT
TRT: 29:19
Download at Pacifica's Audioport here or at Radio4all.net and Archive.org

We discuss Michael Steinberg’s take on the Fukushima nightmare as a final warning to global societies about the dangers of nuclear energy. Acclaimed writer and activist Michael Steinberg is author of the book, Millstone and Me: Sex, Lies and Radiation, published in 1998 by Black Rain. It became a historical document outlining the battle to close an aging nuclear plant in Connecticut. In that case Connecticut residents of all types of parties and social classes came together as one as they noted the health risks posed by the threat of radiation. Could the world finally be doing the same thing?
Japan’s nuclear power company, TEPCO, has said they hope to begin removing fuel rods from plants that melted down in early 2014. The goal is to finish by the end of 2016. Yet even this is uncertain as a time frame for decommissioning the Fukushima Daiichi nuclear power plant. Meanwhile both TEPCO and the entire nuclear industry of Japan are being financially bailed out by the government. (NHK TV) But at the worst possible time in the crisis, the global media has pulled away from the story, even as news that radiation levels spiked to a new record high in early August, we did not see intensive global coverage.
The NY Times did publish an extensive report on the failures of the Japanese government to focus on responding to the radiation leak, TEPCO and the government was centering their attention instead on potential economic damage. Within the past week we saw global markets rise in response to claims that damage to Japan’s economy was not as bad as had been thought. It’s an absurd take according to those who who have been monitoring this story in the independent press. They say we are at a critical moment in the effort to save lives in Japan.

The Australian Broadcast Corporation provided a short news story on the crisis for Japanese school children and nursing mothers. Click Here -- They are finding cesium in their breast milk. Children are testing positive for radiation poisoning. Warning, this video is very emotional to view. It demonstrates the pressing emergency for the children of Japan.