Tracing the Route of a 1920s and 1930s Protest to Save Blair and Coal River Mountains
The coal industry and companies like Massey Energy, now Alpha Resources, have decimated the mountains, and poisoned rivers and streams as well as air in West Virginia and other places. Protesters gathered to retrace their steps and protest Mountain Top Removal.

Produced by Dori Smith
TRT:29:06
Download at Pacifica's Audioport here and at Archive.org and Radio4all.net 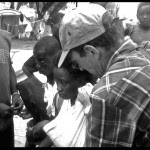 Roger Benham joins us once again. A street medic who has traveled to places like Haiti, Palestine, Louisiana after Hurricane Katrina, and other places, this time he has just returned from West Virginia where he and two other medics from Connecticut got a first hand look at the damage that has been done to the environment by the coal industry, and companies like Massey Energy. Facing lawsuits and criticism over mine safety, Massey was taken over by Alpha Resources. Some have doubts that it is anything more than a name change. Meanwhile, a growing protest movement has been largely ignored as the company has devastated mountain regions, damaging the state’s economy, wrecking homes, and ruining health.

The people of West Virginia have lost their rights to land, and to safety, as the coal industry has blasted the tops off of mountains, poisoning their water, sending rock shrapnel onto them, causing the foundations of their homes to crack, and saturating the air they breath with coal dust. Roger Benham fills us in on the fight to save Coal River Mountain, the subject of Robert Kennedy Jr.’s new film, The Last Mountain. We hear the audio of the movie trailer. Plus he tells the story of the Blair Mountain protests of the 1920s, and how they traced the route of earlier coal mining protesters who also had a lot at stake.

News of the protest appears here, here and here. We will provide further information in the coming weeks.

The history includes a major battle and we hear Roger Benham tell the story of the old battle for Blair Mountain, adding information about a recent effort to make the mountain a national historic site.

There is a short clip of Aunt Molly Jackson, a traditional singer and protest writer who took on the coal industry, mining bosses, and sheriffs, in Kentucky. The clip we hear was part of a special produced by Produced and Written by Mark Torres, Executive Producer: Brian DeShazor, and Narrated by Arline Chang. It is available here.

Posted by Talk Nation Radio at 5:18 AM