Special to Talk Nation Radio, Japan Goes Critical part 2 Scroll to bottom for immediate update on exposed core from plant 3 explosion and crisis, can they avert worst case scenario? We are working on more audio from this interview now.

Dr. Arjun Makhijani on Japan Nuclear Crisis, Anatomy of
Listen to the broadcast below and then scroll down the page as we post updates to this page above the active links. Please suggest that your local radio stations either air this broadcast or contact Prof. Makhijani for further information and updates on the dangers from radioactivity at the Japanese nuclear plants. Arjun Makhijani is present of the Institute for Energy and Environmental Research. He has a Ph.D. in Engineering from the University of California at Berkeley, where he specialized in nuclear fusion. (Listen to part one of this series here, Michael Mariotte, Executive Director of the Nuclear Information and Resource Service, Japan Goes Critical, Is it a Meltdown? What to do? What should we know?)

TRT: 29:17
Download at Pacifica's Audioport here or and at Radio4all.net and Archive.org

Dr. Arjun Makhijani, President of the Institute for Energy and Environmental Research, and an engineer specializing in nuclear fusion. Arjun Makhijani is author of a study on energy conservation potential in the US economy. He is co author of the book, Carbon-Free and Nuclear-Free: A Roadmap for U.S. Energy Policy, where he discusses a US economy based on renewable energy without fossil fuels or nuclear power, and principle editor and author of Nuclear Wastelands, and Mending the Ozone Hole published by MIT Press. Arjun Makhijani: 301-270-5500 (office) or 301-509-6843 (cell) Tell stations to look for his information online at Post-Tsunami Situation at the Fukushima Daiichi Nuclear Power Plant in Japan: Facts, Analysis, and Some Potential Outcomes

URGENT, PLEASE SHARE: Arjun Makhijani suggests America learn an immediate lesson from events in Japan. At all US nuclear sites, the storage polls should be moved. See below:Dr. Makhijani has called on Japanese authorities to tell the world if the spent fuel pool structure is intact at unit 1 OF THE Fukushima power plant. “While Japanese authorities have stated that the reactor vessel is still intact, there has been no word regarding the status of the spent fuel pool structure, except indirectly (see below) Is it still intact? This is a critical question as to the range of potential consequences of the reactor accident.”

Update from Dr. Makhijani from early Mon. 3-14-2011: Post-Tsunami Situation at the Fukushima Daiichi Nuclear Power Plant in Japan: Facts, Analysis, and Some Potential Outcomes: Unit 3, which also appears to have had similar problems as Unit 1, whose fuel includes mixed plutonium oxide uranium oxide fuel (“MOX fuel”) first went critical in 1976. Both reactors are of the Mark 1 Boiling Water Design. They do not have the sturdy secondary containment buildings of concrete that is several feet thick typical of later reactor designs. (March 14, 6:30 a.m. note: Unit 3 has also experienced an explosion and Unit 2 appears to have lost cooling. The problems described here would likely apply to Unit 3; Unit 2 may be headed to similar problems.)

Updating concerns about the containment pool that were expressed in this broadcast, On 3-14-2011 he writes: An explosion associated with Unit 1 occurred on March 12, at 3:36 p.m. (TEPCO press release, March 13, 2011 of 9pm Japan time.) At first the authorities stated that this was in the turbine building next to the reactor building. However, it is the reactor building rook and part of the walls near the roof that were completely blown off leaving only a steel skeleton at the top of the building. This indicates an explosion inside the reactor building – probably a hydrogen explosion, since hydrogen is much lighter than air, it would accumulate near the top of the building. The explosion therefore seems to have occurred near the level where the spent fuel pool would be located in a Mark 1 reactor.

3-13-2011: 1:30 PM: Dr. Arjun Makhijani updates his concerns: “I am very concerned about the damage that the explosion did to the spent fuel pool where all of this highly radioactive used fuel is stored. And if that is uncovered and if there is steam around that, that can also generate hydrogen and that can in extreme circumstances also catch fire. So it’s not clear to me that the radioactivity after the explosion was coming only from the reactor. I think it may have been coming from the spent fuel pool, and or, from the reactor. But because we can’t inspect the insides now it’s really impossible to tell and whether the spent fuel pool has been damaged, and whether there are cracks in the reactor, although the vessel is more or less intact, it’s very hard to tell”.

URGENT PLEASE SHARE WIDELY: The United States should move as much spent fuel out of the pools as possible into hardened and secure dry storage. The tragedy in Japan is also a reminder that making plutonium and fission products just to boil water
(which is what a nuclear reactor does) is not a prudent approach to electricity generation. While existing reactors will be needed to maintain the stability of electricity supply for some time (as is also evident from the earthquake-tsunami catastrophe in Japan), new reactor projects should be halted and existing reactors should be phased out along with coal and oil. It is possible to do so economically in the next few decades, while maintaining the reliability of the electricity system and greatly improving its security, as I have shown in my book Carbon-Free and Nuclear Free: A Roadmap for U.S. Energy Policy published in 2007, and in subsequent work that can be found on the IEER website, www.ieer.org. Carbon-Free and Nuclear-Free can be downloaded free here. 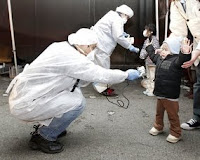 Workers have been scrambling to cool three reactors and there have been reports that one or more was semi critical or under going meltdown at various times during the weekend. A high alert is in place still for plants 1 and 3 but plant 2 is said to now be more stable. Workers are trying to find the source of radioactivity being detected there however, and Japanese are officials calling the earthquake, tsunami, and nuclear plant instability, the worst crisis for Japan since WWII. We hear about the configurations of the plants, the kind of radioactivity they have, i.e., specifics of Plutonium and the dangers to people of Japan and other countries. Expect part two of this interview shortly. Photo from Reuters, picked up by AJE 3-12-2011)

Core exposed, www.nirs.org FACT SHEET ON FUKUSHIMA NUCLEAR POWER PLANT
UPDATE 2:30 pm, Sunday, March 13, 2011. Tokyo Electric Power is reporting that some six feet of the core of Unit-3 remains uncovered and has been for some time despite efforts to pump water into the core. Tepco speculates there may be leaking pipes and water is not remaining in the core. A translation of part of the statement from our Japanese colleagues: "The fuel's integrity has been considerably compromised. We are assessing a considerably serious situation." UPDATE, 1 pm, Sunday, March 13, 2011. The International Atomic Energy Agency reports that a first-level (lowest-level) emergency has been declared at the three-unit Onagawa nuclear station north of Fukushima. Immediately after Friday’s earthquake a fire broke out at this facility, but it was said to have been extinguished fairly quickly. However, on Saturday, elevated radiation levels were measured at the Onagawa site (about 10 microSievert/hour or about 1 millirem/hour) for a few
hours. The emergency was declared due to these elevated levels, but utility officials say the reactors there are under control.