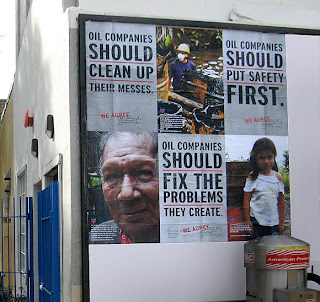 The Yes Men, Rainforest Action Network, Amazon Watch, Nab Chevron for False PR Campaign
"We Agree" with Chevron say the Yes Men, but they are spoofing the oil giant.


Interview with Maria Ramos of the Rainforest Action Network about the trick they played on Chevron, and why. She discusses the critical situation in the Amazon where people are sick and some have died because of oil toxicity that is Chevron's responsibility. The oil giant has tried to evade that responsibility, and Ramos explains what they are doing to try to see to it that they clean up the ongoing oil disaster in the rainforest.

CLIPS: Chevron Toxico: The Campaign for Justice in Ecuador

Clips: Woven Songs of the Amazon, film trailer shows women and children singing songs about the earth, water, and trees, and protecting them.