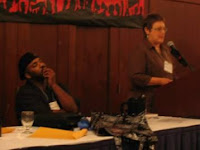 Chris Gauvreau of Connecticut United for Peace discusses the uniting of her group with CAIR, the Council of American-Islamic Relations, in CT, http://www.cair-ct.com/ as they join other peace groups in vowing to keep on fighting policies of U.S. intervention, and demanding jobs. They see the latest rounds of FBI arrests and grand jury subpoenas as an outrage.


Produced by Dori Smith
TRT:29:00
Download at Pacifica’s audioport here and at Radio4all.net and Archive.org

Peace groups and union leaders in coalition with them have been organizing ahead of a national demonstration in Washington D.C. and we discuss the impact of FBI raids on peace activists who will be facing grand juries in early October. Groups are re declaring their commitment after the FBI has arrested and subpoenaed leaders in Chicago and Minneapolis just one week prior to their national protest.

Talk Nation Radio for September 30, 2010
Peace groups have set up a web site to discuss the crisis here. Chris Gauvreau offers advice to people who have been arrested or who fear they might be arrested in the ongoing FBI sweeps that have affected Quakers, Catholic Workers, the Thomas Merton House, Greenpeace, and groups working for Palestinian rights such as the Arab American Action Network. Their executive director, Hatem Abudayyeh of Chicago, is one of those subjected to an FBI raid and subpoenaed to a grand jury.

Why did FBI agents take these repressive measure now in spite of a Department of Justice review of their actions targeting the very same types of groups? They were criticized by the DOJ for applying 'war on terror' rules when targeting peace activists, yet they are claiming the very same grounds now. What is up with the FBI, and is it incompetence or a carefully planned political attack?

New reports (wire services) indicate that 22 FBI employees were just found to have cheated on tests during an open book exam on agent guidelines.The Office of the Inspector General found the cheating, and Inspector General Glenn Fine said, "We believe the extent of the cheating...was greater than the cases we detailed in this report." The Hartford Courant.

Chris Gauvreau has recently presented arguments against peace groups organizing a “right-left” coalition. We fold these comments into our program as part of a discussion on the wider political implications, and also air clips of what Noam Chomsky said during an interview with Tom Ashbrook of ‘On Point Radio.‘ The show is an NPR daily program produced out of Boston’s WBUR. They titled their interview with Chomsky: Noam Chomskey on U.S. Rage, Ruin. They have lately been taking a look at how anger is affecting voters ahead of the U.S. Congressional races November 2, 2010. Chomsky mentioned that there is a rising fascist trend in the United States. He also discussed the Republican Party as having deteriorated, and said members of the tea party are waiting to be organized.

These are voters who are being misinformed and who can’t vote their self interests until they have the facts. Chomsky is also calling on people who are being critical of the Tea Party voters to see some of what they are saying as a “cry for help”. The Democrats are not reaching out to them he argues.

Chris Gauvreau agrees with Chomsky and she has also said that the leadership on the right could not be helpful in building a national coalition of the majority. So it is a matter of addressing individual voters, not demagogic leaders using slogans, targeting Social Security, and in some cases using xenophobic and even racist language. Listen to her entire speech here along with other views about this topic:
http://www.thestruggle.org/MediaP.htm