UPDATE: Bonnie has been downgraded to a tropical storm but is making landfall on the eastern Gulf Coast as of 5 a.m. ET with maximum sustained winds of 35 mph as of.

UPDATE: There was an evacuation of all ships from region of blown BP oil rig in Gulf of Mexico as a possible cat 3 hurricane approached. The storm has been downgraded as it now moves into the Gulf. 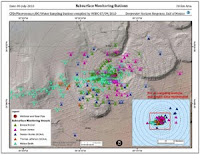 With a storm approaching, we hear from Admiral Thad Allen, and scientist Samantha Joye describes the dangers she is familiar with as we discuss the Deep Water Horizon spill and complications involving Methane and other gases.


Produced in Connecticut by Dori Smith and syndicated nationally with Pacifica Network
TRT: 29:00
Download at Pacifica's Audioport here or at Radio4all.net and Archive.org

With bad weather, a tropical depression storm approaching the Gulf of Mexico, the government and BP Joint Task Force called a press conference and Thad Allen, the National Incident Commander, took our questions. We asked him first what percentage of oil versus methane and other gas may be leaking from the well head, the cap or other leaks identified after the most recent test capping of the blown well. We also asked Thad Allen to describe all of the leaks identified since the capping test, and to talk about any new ones they have discovered. Scientists have been closely watching to determine if the cap is displacing pressure and causing leaks underground. If they can't observe the cap because of bad weather for up to four days, Allen said, they could decide to reopen the cap to avoid missing signs the well is buckling.

Dori Smith: …to what the percentage of oil versus methane is in any of the leaks that have been identified, either on the cap area of the well or in any plumes nearby within the radius that you’ve been looking at, concerned, of course, about the pressure?

Thad Allen: We believe, especially around the current blowout preventer the capping stack that it is a mixture of the hydrocarbon column itself, which would be some mixture of oil, some natural gas, and some water. The existence of hydrates on the blowout preventer and the capping stack is indeed that there is gas there because the gas combined with the cold water and pressure is what produces hydrates. So there is some amount of methane gas in that.

The exact percentages, we have taken samples and they’re being analyzed ashore. Some samples done on scene based on the samples that were taken in around the wellhead indicated there was about 16 percent methane, but that needs to be validated by a shore test.

Dori Smith: And can you finally, on follow up, tell us is – has BP or has anyone identified new plumes or new leaks beyond what were already being studied in the vicinity?

Thad Allen: What we have asked BP to do is actually number these events so we can follow them. And I can take you through the general grouping of them. On the 17th of July, that was the event that we noted that was three kilometers southwest of the wellhead that we now have attributed to be in place before this started, probably attributable to another well.

Then we had a series of anomalies that were detected on the 18th of July. And these are just differences in density and return on both the seismic and the acoustic sensors. They were investigated with ROVs. They thought there might be some plumes. There were some gas bubbles brewing and they were followed up with ROVs. There were no other indications observed, and we closed out on those.

Following that, on the 19th is when we started to observe the bubbles around the current wellhead in the blowout preventer. Those have already been reported. And these are emanated from the wellhead itself through gaskets and seals that happen to be leaking.

And finally, we found another leak just yesterday in the BOP in the annular preventer. That’s the upper part of the BOP or the lower marine riser package. And that’s attributed to a leak in a gasket as well.

I think what you’re generally starting to see is from the blowout preventer—it’s been down there a long time under a lot of stress. And just like any other piece of equipment, we’re starting to see some small leaks around it. But that’s been it so far". ) From Joint Task force transcript..7/21/2010

Our interview with Dr. Samantha Joye was recorded July 9, 2010

It is roughly three months since the start of the worst oil disaster in US history and according to our guest, Dr. Samantha Joye, of the University of Georgia Marine Science Department, it is more accurate to call this a “hydrocarbon spill”. Dr. Joye explains why the high concentrations of methane gas leaking from the well head and from seeps near it have presented the core of the problem all along.

Dr. Samantha Joye and a team conducting research with funding from NOAH, have been providing regular updates on Gulf of Mexico water values. We asked Dr. Joye to discuss the rather unique problems at the drill site of the Deep Water Horizon rig explosion. She explained that the seabed where BP drilled is sand and gravel, not salt which would be the preferred platform material for an ocean drill site of this kind.

Dr. Samantha Joye of the University of Georgia became prominent in the headlines after establishing new problems in the Gulf of Mexico due to large plumes of oil and methane that posed a risk to oxygen levels in the water column. BP downplayed the results, but Joye has persisted in her research, and she points out that the type of scientific testing she has been doing takes time and multiple tests. She documents her research at Gulf Oil Blog and a documentary produced by the University of Georgia is airing this week through the Georgia Public Broadcasting network.

We established during previous shows that the rig would have produced a very large amount of oil had it been operational. The amount that BP saw as a ‘worst case scenario’ blow out leak amount would be 100,000 barrels per day. This is far more than average given that all 33 proposed wells to be drilled in the Gulf of Mexico would produce 80,000 to 100,000 barrels per day combined over a six-month period.

BP actually drilled into a vast Methane gas field at the Deep Water Horizon site, which could pose further risk. Pressure from the capped well could put too much pressure on weak points, a known fissure identified along the pipeline, and other locations at or near the BP rig. Dr. Joye explains in scientific terms what the dangers are, and shares the work of her team at the University of Georgia which has been studying life in the Gulf of Mexico and oxygen levels in the water column near the spill. They have been going to the region with test equipment to identify problems caused by plumes of oil and gas located at various sites near the Deep Water Horizon rig disaster.

She has also said the use of chemical dispersant presents another environmental problem, as they can be more toxic than the oil itself to some species.

British Petroluem capped the well experimentally prior to completion of the relief wells which are apparently nearly complete and may be ready this week end depending on rain storms bearing down on the Gulf of Mexico. BP plans a static kill, flooding the well head with mud and cement for this weekend, however, incident commander Thad Allen explained that weather conditions could prompt an evacuation of all ships from the region, which would mean loss of the visual from the leaking well head.

Her work in fact takes her to the ocean’s depths in the Gulf of Mexico, and initially, she explained, they predicted what would occur and then began scientific testing in the Gulf to establish the facts.

Posted by Talk Nation Radio at 9:28 AM