Produced by Dori Smith
TRT: 29.00 music fades
Download at Pacifica’s Audioport here if a member, or at Archive.org and Radio4all.net

'There are countless CIA people in Afghanistan who are on the front lines, who are actually fighting'. Author H.P. Albarelli, Jr. 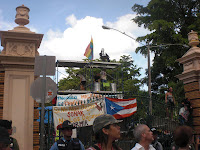 There have been messages in solidarity from students all over the world so I think the message is out there and its powerful and I think the government will have to listen now because now they are looking bad'. General Strike May 18, 2010.

UPDATE from May 20th, 'A couple of incidents today. A demonstration at a private hotel, where the the governor was at a fundrasing, police beating the protestors and 5 people arrested'. May 21st: 'Student media has continued to be a source for information on the general strike. An online newspaper, UPR, links to Radio Huelga, a radio station created by the students and transmitting directly from the strike. there are also videos. Now they are transmitting a demo with music'! 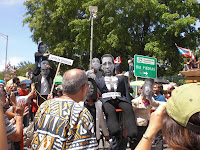 University of Puerto Rico Administrators RESIGNS: The Chancellor of Arecibo, one of the campuses, was asked by the president of the university to resign. As a result the deans of all schools resigned in solidarity!!!


More from H.P. Albarelli on the CIA. Then reports from the University of Puerto Rico on a General Strike that has caught the imagination of students all over the world. The students are camped out at The University of Puerto Rico after an unsuccessful attempt to get the administration and governor to drop plans for a tuition hike that would likely end the educational dreams of some 60% of the student body, this, the mostly poor people in college in Puerto Rico. 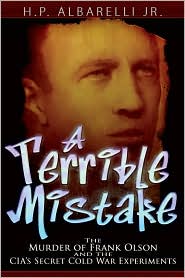 H.P. Albarelli Jr., is author of the book, A Terrible Mistake, The Murder of Frank Olson and the CIA's Secret Cold War Experiments. He describes what key people at the CIA have created. They were fervent anti communists, and had wealth and privilege, and saw themselves as modern day Knights Templar, above known laws. (See clip of film we used by that name here.)

On page 42 of 'A Terrible Mistake' H.P. Albarelli Jr., writes about the start up of a biological warfare project at then new Fort Detrick, (Detrick Field) in early 1942. The Roosevelt Administration ordered the DOD to 'take whatever measures were necessary to bring the United States up to speed with Axis and Allied powers'.

'In response, the War Department created the War Research Service (WRS), and installed George Wilhelm Merck as its director. Merck was a natural for the job, as he was already a high ranking consultant to the War Department on biological warfare. He was also head of Merck & Co., one of the oldest and largest pharmaceutical companies in the world. The firm had its beginnings in the late-1600's in Darmstadt, Germany as the E. Merck chemical factory. In 1891, George Merck, George Wilhalm's father, left Germany to establish Merck & Co., in New York City. His son, George Wilhelm Merck, born in West Orange, New Jersey and a Harvard graduate, had assumed control of the company in 1925. The younger Merck dynamically guided the company to become the largest full-line producer and distributor of pharmaceuticals in the world. Merck & Co. has since been responsible for countless innovations in the drug industry, including many in the controversial areas of enthnogenic products and shamanic inebriants'.

'In 1914, Merck's German operation was the first company worldwide to synthesize and patent methylene dioxymethamphetamine, or MDMA. As readers shall see, MDMA, a semi-synthetic psychoactive drug popularly known today as Ecstasy, was tested in the early-1950's under the codename EA-1475 at the Army's Edgewood Arsenal'.


Download at Pacifica's Audioport here or at Radio4all.net and Archive.org.


Part 1: H.P. Albarelli Jr. on his book, A Terrible Mistake, the Murder of Frank Olson and the CIA's Cold War Experiments

… ‘So he seeks to stop us, to claim our treasure for himself. Pure madness. Let him try, every angel can fall…. Why do you not join us brother’. The Hollywood version of, The Knights Templar, a film – at that particular moment in the film, a Knight has been stabbed in the back. Frank Olson was likewise stabbed in the back, killed in fact, after being dosed with LSD without his knowledge. He was pushed out a window, according to this groundbreaking new book by H.P. Albarelli, Jr.

The creators of the CIA had a fascination with the crusades and other Knights Templar stories involving the Middle East, with stories of the Ark of the Covenant, Soloman’s Temple, and the visions of Ezekiel, important to Jewish mystics.
In Hank Albarelli’s book, A Terrible Mistake, we find that the men who created the CIA had a by any means necessary attitude about their version of national security, but they were also after corporate and political power. There was Allen Dulles, an oil industry executive, Dr. Sidney Gottleib, head of the TSS Technical Services Division that researched all means of controlling human beings, John Mulholland, an expert at sleight of hand and deception, and the former OSS officers, William Colby, Frank Wisner, and others, who saw themselves as modern day saints, saving Western civilization from the dark forces of communism.

Hank Albarelli is an investigative journalist who studied law, and worked in the Carter White House before turning to the study of financial institutions, unions, and biological and chemical warfare operations. His web site is www.albarelli.net

Rene Vargas, a law student on the negotiating committee at the University of Puerto Rico. He explained that they are worried about dramatic budget cuts and what would amount to an end to education for thousands of students.

More than 60% of the student body could lose the ability to attend college altogether. Rene Vargas is on the negotiating team, and he explained May 18, 2010) that initially, the school board refused their requests for meetings. Ultimately he was able to present the student's concerns and demands to administrators, but he said little came of it. And as the students learned more about what the school administrators planned to do, they became deeply concerned about the future of the 11 campuses at UPR. They sought further information on plans to sell or privatize portions of the school but were shut out of the process. They have accused the school board and government of a lack of transparency.

The widespread support for the students in Puerto Rico stems from the way they have been treated. First, the seriousness of their requests has been downplayed. and finally, the Governor delivered a state of the union address in which he chastised students, telling them their educations were inexpensive anyway.
The General Strike involved many different levels of students, and also some government workers. The Unions have negotiated a separate agreement with medical students as they work with patients.