Elizabeth Gould and Paul Fitzgerald, provide their expert news analysis on Afghanistan and Pakistan. The threat to these journalists from War Lord Gulbuddin Hekmatyar's U.S. representative, and in Pakistan.

And journalist Muhammad Khurshid describes threats to civilians, journalists, political figures, and others, as a month of April terror continues to unfold in Pakistan. Journalists are being threatened by various forces including government ones, he says, and he blames the US, and US dollars to corrupt actors in the region and leaders is adding fuel to the fires of war.

Produced by Dori Smith
TRT: 29:08
Download at Pacifica's Audioport here if a member, or free at Radio4all.net and Archive.org.

The well known writing team of Gould and Fitzgerald are the co-authors of the book, Invisible History, Afghanistan's Untold Story, are working on a new book. According to Paul Fitzgerald Fitzgerald the name has special meaning: “Crossing Zero, that’s the term used by the US defense establishment for the line between Pakistan and Afghanistan”.

UPDATE: The new book by Gould and Fitzgerald is to be named, Crossing Zero: The AfPak War at the Turning Point of American Empire. See cover and order information here. 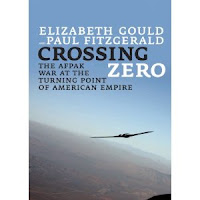 Articles by Gould and Fitzgerald:
Gulbuddin Hekmatyar, the Messiah of Darkness, Huffington Post, April 5, 2010: "It's not everyday that an American citizen living in the USA gets an email from the representative of a legendary terrorist warning that they may face legal action for writing well documented criticisms of his boss. But on January 25, 2010 Mr. Daoud M. Abedi of the Hesb-i-Islami Afghanistan (HIA) emailed us on behalf of Afghanistan's longest running warlord, drug trafficker and terrorist, Gulbuddin Hekmatyar".

"Abedi was reacting to our blog, In Afghanistan: Embracing Gulbuddin Hekmatyar Is No Method at All, posted that day. We had addressed the insane possibility that terrorist Gulbuddin Hekmatyar might be considered as a "sane" solution for the mess the U.S. has gotten itself into in Afghanistan. Since Hekmatyar was listed on February 18, 2003 by the United States State Department and the United States Treasury as a global terrorist under Executive Order 13224 (which freezes his assets and criminalizes any U.S. support for him) and has been the object of a Predator drone strike, and recently claimed credit for a deadly attack on French NATO forces fighting in Afghanistan, we thought that a terrorist maintaining a high public profile in the U.S. would be a disadvantage. So it came as a surprise that Hekmatyar and his political party Hesb-i-Islami are not only out in the open in the United States, but are issuing threats (just the way they do in Afghanistan) to anyone who tries to get the word out about their past".

October 8, 2009, The Gathering Storm: Dark Omens for the US in Afghanistan here

Book Review by Anthony Fenton, Invisible History: Afghanistan's Untold Story by Paul Fitzgerald and Elizabeth Gould, From: The Reality of Life in Afghanistan, RAWA. (here) "As Gould stated in an interview with Asia Times Online, Charlie Wilson's War "is a complete flip flop of the reality".

"As such, one of the concerns that Gould and Fitzgerald are seeking to address is the problem that "there are still people in administration positions, in journalistic positions, in academic positions who still believe the fundamentals of Charlie Wilson's War". As Fitzgerald added, "every line cook and bottle washer in and around Washington is now an expert on Afghanistan", reflecting a popular discourse that is "far detached from reality".