Accountability for US and Israeli Leaders: A complaint to ICC on Bush et al and it's US Politics as usual re Israel and Palestine

Talk Nation Radio for April 15, 2010
Francis A. Boyle, Nanjundiah Sadanand, Accountability for US and Israeli Leaders: A complaint to ICC on Bush et al and it's US Politics as usual re Israel and Palestine

TRT:29:16
Download at Pacifica's Audioport here or go to Radio4all.net and Archive.org 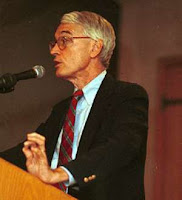 We continue our special series on accountability for the US and Israel with International law expert Francis A. Boyle, author of Breaking all the rules, Palestine, Iraq, Iran, and the Case for Impeachment, and many other books. We discuss Attorney Boyle's complaint to the ICC, International Criminal Court, filed against former President George W. Bush, and members of his Cabinet, ex-Vice President Cheney, ex-Secretary of Defense Donald Rumsfeld, ex-Secretary of State Condoleezza Rice, ex-Attorney General Alberto Gonazles, and former CIA Director George Tenet. (ACLU, Rendition, the Movie here)

The complaint was submitted directly to The Honorable Luis Moreno-Ocampo, the Chief Prosecutor for the ICC. You can read the cover letter and learn more here at Bushtothehague.org.

Professor Nanjundiah Sadanand, of the Physics and Earth Science Department at Central Connecticut State University talks about the way Connecticut Democrats Joe Courtney (2nd District) and Chris Murphy (5th District) have explained their yes vote on H. Res. 867, Calling on the President and the Secretary of State to oppose unequivocally any endorsement or further consideration of the Report of the United Nations Fact Finding Mission on the Gaza Conflict.

Palestinians get little if any coverage in the corporate US press, and their leaders are increasingly divided over gaining support from the West in exchange for concessions on land, the right of return, and allowing Israel to illegally acquire Jerusalem. with billions of US dollars going to Israel annually, it's easy to see why Palestinians feel slighted by the world.

Israel is the new Silicon Valley, gaining acquiring defense contracts for high tech weapons, surveillance technology and drone guidance systems. Peace activists like Dr. Sadanand have also challenged Connecticut Democrat, Joe Courtney, on his yes vote on H. Res. 867, and he too said the official UN investigation and report by Judge Goldstone was not helpful. Joe Courtney has relied on the progressive Democratic vote, but is clearly under pressure over job loss in Connecticut. His previous campaigns have disintegrated into debates about building more nuclear submarines in Groton, CT. On April 7th his trade mission to Israel came under scrutiny by peace activists.

Democrat Joe Courtney in Connecticut's second district also voted yes on the resolution against the Goldstone report. He too explained to peace activists that the report was not helpful.

Courtney said defense industry giant UTC would be participating in the trip, this as UTC and Lockeed Martin are working to finalize plans to send 25 advanced F-35 warplanes to Israel at a cost of 80 million a piece. The US has already finalized plans to send three new Hercules C-130J aircraft to Israel at a cost of $70 million per plane. It's difficult to see how this deal with help the US economy though. The planes are to be paid for with U.S. Foreign Assistance Funds. London's Rolls Royce builds the C-130s, with some manufacturing done in Indiana.

January 2010, Germany sells Israel more Dolphin Subs
"In 2006, the deal was finalized at a total of $1.27 billion, with the German government picking up 1/3 of the cost."

U.S. Can't Afford Military Aid to Israel, Josh Ruebner "Data published recently by the US Campaign to End the Israeli Occupation shows that U.S. military aid to Israel comes at a financial and moral price that this country cannot afford to pay. Its website reveals that this same $3 billion earmark for Israel could be used instead to provide more than 364,000 low-income households with affordable housing vouchers, or to retrain 498,000 workers for green jobs, or to provide early reading programs to 887,000 at-risk students, or to provide access to primary health care services for more than 24 million uninsured Americans.

If U.S. weapons were going to Israel for a good purpose, then perhaps a coherent guns versus butter debate would be appropriate. However, Israel repeatedly misuses U.S. weapons to commit grave human rights abuses against Palestinians who are forced to live under its illegal 42-year military occupation of the West Bank, East Jerusalem, and Gaza Strip."

Global Security, Military Industry, Israel, There are approximately 150 defense firms in Israel, with combined revenues of an estimated $3.5 billion. The three largest entities are the government-owned IAI, IMI and the Rafael Arms Development Authority, all of which produce a wide range of conventional arms and advanced defense electronics. The medium-sized privately owned companies include Elbit Systems and the Tadiran Group, which focus mainly on defense electronics. The smaller firms produce a narrower range of products. In all, the industry employs close to 50,000 people, all of whom share a commitment to high levels of research and development and the ability to make use of the IDF's combat experience.

The five-year plan includes lifting a cap on tax credits for parent corporation United Technologies Corp., providing training assistance, and establishing a job retention tax credit. It also includes investments in machinery and equipment and the building of an Engineering Center for Excellence for engineers at Pratt & Whitney and other aerospace companies."

Labels: Accountability for US and Israeli Leaders: A complaint to ICC on Bush et al and it's US Politics as usual re Israel and Palestine