Brad Friedman Troubleshoots our Voting Systems ahead of the November 2, 2010 Congressional Elections

Brad Friedman Troubleshoots our Voting Systems
ahead of the November 2, 2010 Congressional Elections

Voting special Number 1 for the 2010 Congressional Election on November 2, 2010 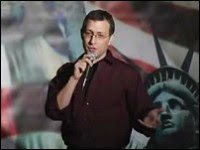 Brad Friedman of Bradblog.com joins us with an overview of the nation's voting systems as we approach the November 2nd, Congressional election. He has used his http://www.bradblog.com web site to document problems with the nations voting machines for years. We talk about the latest round of problems with voting machines and with absentee ballots, voter rolls, numbers that don't add up and more.

Brad Friedman raises questions: Did Tea Party Republican Christine O'Donnell actually win Delaware? He says no one can actually prove that she did. Meanwhile, angry Republicans have filed a Federal Elections Commission complaint against O'Donnell, but they are looking at campaign contributions and public outreach.

-Meg Whitman's attack on former President Bill CLinton about what amounted to a CNN error. "Billionaire Meg Whitman, a former EBay CEO who surpassed the $100 million mark in campaign spending nearly a month prior to the traditional Labor Day kickoff of the Fall campaign, who, by Sept. 16, had donated a record-smashing $119 million of her own funds to her campaign, who refused to meet with former California Democratic Governor Jerry Brown and Republican State Insurance Commissioner Steve Poisner in a pre-primary debate, has knowingly sought to fill the gaping knowledge deficit created by the corporate media's gross neglect of its fourth estate responsibilities with disinformation about Brown, her Democratic opponent". (From Bradblog.com)

How much negative campaigning can voters take and how much can wealthy candidates like Whitman or Republican Linda McMahon spend? Both gained razor sharp corporate skills, but are they running their campaigns more like CEO's than candidates?

As Linda McMahon campaigns for the U.S. Senate being vacated by long time Democratic Senator Chris Dodd, she is promising to spend as much as it takes to win. She has been saturating local TV and radio with negative attack ads about Attorney General Richard Blumenthal and some have questioned her judgment. Still she has pulled to near even with Blumenthal. But how much money are corporations contributing to candidates? They don't have to say.

We also hear about faulty voting machines and systems, it's Diebold again, and we hear about problems in Shelby County in Memphis, Tennessee where ten candidates filed lawsuit and in Alaska where Republican Sen. Lisa Murkowski now plans to run as a write-in candidate after losing her GOP primary race to "Tea Party" candidate Joe Miller. Can the voting machine system really function for write in candidates?

This program is produced in Storrs, Connecticut and syndicated nationally with Pacifica Network. Our web site is talknationradio.org and you can write to us at talknationradio@gmail.com. Our theme music is by Fritz Heede.

Underwriting for this program was brought to you by JeremyRHammond.com, political analysis from outside the standard framework. He is founder and editor of ForeignPolicyJournal.com and a recipient of the Project Censored 2010 Award. New at jeremyrhammond.com, “Newly Disclosed Documents Shed More Light on Early Taliban Offers, Pakistan Role”, a review of Taliban proposals to turn over Osama bin Laden and Pakistani efforts to get the U.S. to negotiate with the Taliban on their offers.”

Talk Nation Radio interview with Jeremy R. Hammond Has the US been fomenting unrest in Iran? here

Posted by Talk Nation Radio at 4:14 PM No comments: